In this post, I will show how to use the flow Invocable Action… Actions are easy to discover and use, and also easy to understand and implement. Every button and link in Salesforce can be considered an action. A consistent Actions API and framework support the creation and distributed use of actions throughout Salesforce. Actions are available in the REST API. Invocable actions, also known as dynamic actions, can be invoked from a common endpoint in the REST API. Here we will be creating a flow and calling the flow using the REST API. The example we are taking here is returning the order and order lines items based on the order name from the auto-launched flow.

OrderResult is sobject variable and adds the following fields

Now drag and drop one more Fast lookup now to query the order line items and this time we will assign the value to result variable to sobject collections. 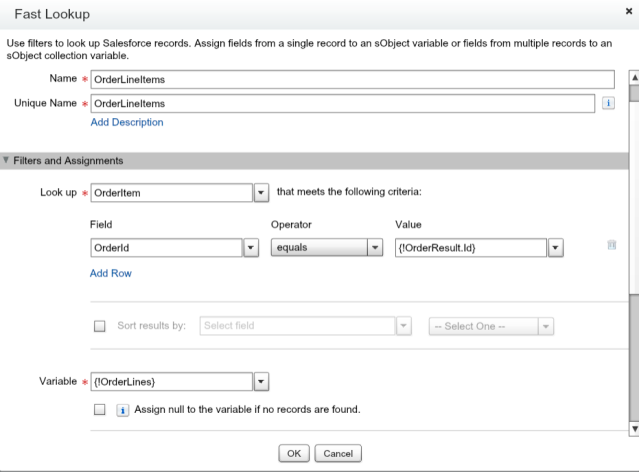 Orderlines in the sobject collection type and return the following fields.

Connect the two fast lookups as shown below

Now you will be able to call the flow from the invocable flow actions. Now you need to use the custom flow actions rest URI

You will be able to execute the REST API from the workbench. Go to the salesforce workbench and execute the rest API as shown below

After executing the flow action, you can able to see the result as shown below